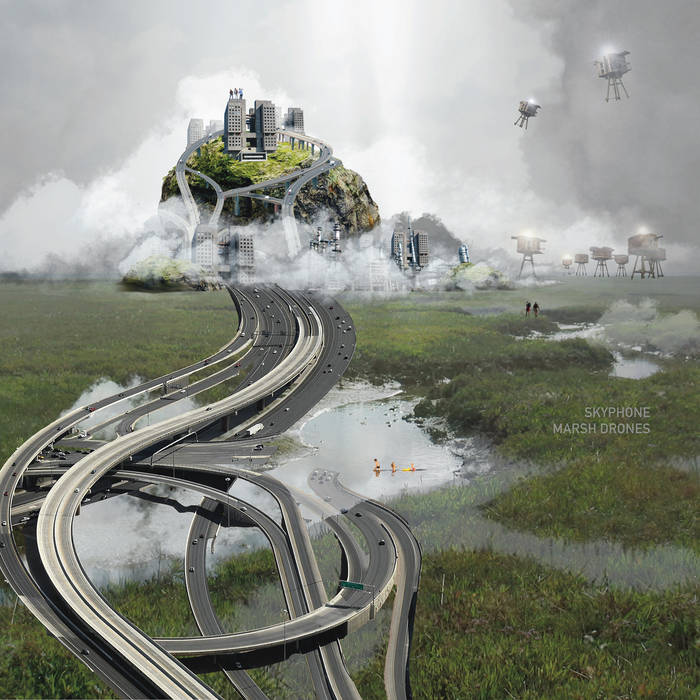 Lost Tribe Sound completes their long running Fell To Shadow 8 album series with two albums from the Danish trio, Skyphone. ‘Marsh Drones,’ their first new album in over 5 years, will be released along side their previous album ‘Hildur’ (appearing on vinyl for the first time) on August 23rd, 2019.

The marsh land areas of western Jutland in Denmark can be flat and non-distinct to the visitor who only takes a quick glance at it. But when you are born and raised in those parts, and when you travel away to live, work, raise families, play music, anything to escape the rainy flatlands, you think about that landscape differently. On Marsh Drones, the weirdness of this landscape is reimagined in a kind of giddy, absentminded way, as though they try to recall not only the broad topographical scheme of the land (cultivated, industrialized, farmed, soggy with seawater, a breach of the ditches that pours cold north sea water inland, the farms and waterways overflowing), but only the detailed, grainy realness of sediments and layers of soil, of the hazy and salty light (Saltlys) that wraps the landscape in a kind of palpable inertia.

Many of the ideas on the 'Marsh Drones' emerged from field recordings from the area around the Tønder marshlands recorded by various members of the band. They provided a backdrop to the loops and long guitar session of guitar, bass, synthesizers, and samples that were slowly mangled and rearranged into counterpointing and fugue-like melodies, insistent on repetition while odd atmospheres of distant drones and noise works to modify and shift the composition into new shapes. The music is minimal, restrained, but rich in detail like the landscape it attempts to resonate with. There are remnants of folk music, melodies that are almost recognizable, but dub music and something distinctly digital intersects itself into the woodwork and authenticity.

Bird murmurations cloud a setting sun, they settle in the reeds with a hush. Maybe, today, it’s Murmalvejr, some sort of imaginary word for a kind of weather that doesn’t really exist. The rhythms are sometimes based on minuscule clicks that embellish the track in something resembling a detailed microscope peek into watery silt and soil. Sometimes a drum machine appears, adorning track with an afterglow of past futures, organic machines that drag though the landscape, yellow industrial lights that flash smoothly across the wet soil. Drones traverse the sky, they sense the landscape in code, assembling irregular digital maps. If one imagined the landscape seen through the eyes of some yet unknown apparatus that scans the past for signs of the future.

With the stunning physical editions of their brand new effort ‘Marsh Drones’ and the reissue of ‘Hildur’ releasing on the same day, along with the captivating artwork of Martin Sønderlev Christensen, both albums having been mastered for vinyl and digital by the impeccable ears of Emil Thomsen at ET Mastering, there isn’t much more long time fans of Skyphone could hope for! The albums make clear why Skyphone (Thomas Holst, Keld Dam Schmidt, and Mads Bødker) have stood the test of time. There is a clarity, a warmth, and a consciousness to their music that remains a rare commodity even to this day. ‘Marsh Drones’ and ‘Hildur’ will be available in limited runs of 180gm audiophile vinyl, produced using the lacquer cut method. The vinyl comes housed in a beautifully textured, reverse print sleeves. Each is hand-numbered and limited to only 200 editions for each album, with no repressings or second editions.

THE YEAR'S BEST ALBUM COVERS - "Its design is intricate, its web spun with a mix of materials from folk to electronic to ambient, eventually producing a tapestry. In contrast to Hildur, the new album is less abstract and jazzy, more homespun and welcoming." - (Richard Allen) A CLOSER LISTEN

2019 IN REVIEW FAVS: ELECTROACOUSTIC & EXPERIMENTAL FOLK - "Eclectic? Very much so, but it a friendly, unpretentious, and distinctly ear-catching way born of genuine creativity. As with all Lost Tribe releases, the art, design, and packaging are impeccable as well." - STATIONARY TRAVELS

8/10 STARS - "The first thing that jumped out at me was how sumptuous the production was. Beats are often barely audible, merely ticking over with gentle hisses and electronic burbling, which gives the music a reverential air. For a record that is full of stuff, be it acoustic guitars, samples, processed electronics, autotune, synth pads, drones, drum machines, treated percussion, 'Marsh Drones' never sounds saturated. It's seems sparse, somehow, and that's down to Skyphone's talent for songcraft and arrangement." - (Will) NORMAN RECORDS

"The thing that is most noticeable for me in regards to the material on this album five years on from “Hildur” is the more matured feeling that comes across. That previous album is not immature in any fashion, but the overwhelming joy has been re-focused into a style of music that is very similar, but feels more subtle and considered." - DRIFTING, ALMOST FALLING

Skyphone toys with ideas from rock, dub, electronic and concrete music, fusing melodies and sounds into colorful landscapes. Highly recommended for hypnotized walking on a variety of wobbly surfaces.

Bandcamp Daily  your guide to the world of Bandcamp

Serena Cherry debuts her black metal project, plus a Pick from the Crypt block from Svalbard